Jane and the Story of the Triplet New York Tummy Tuck 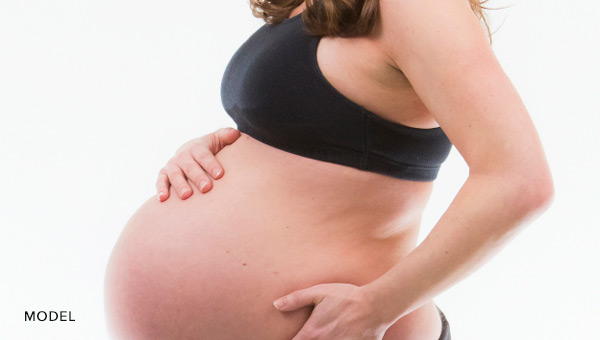 Jane had triplets and originally approached to me to consider performing a tummy tuck (aka “abdominoplasty”) in NYC at the time of her cesarean section. I told her that I didn’t think it would be a good idea. I wanted her to have a nice result and I suggested that she have her children first and come back to speak to me a year later. In my opinion, it is a mistake to perform abdominoplasty at the time of C-section because none of the anatomic landmarks are in their proper place and the patient is bound to end up with a suboptimal result (incidentally, I have blogged about how a tummy tuck can remove C-section scars in the past).

Three years after giving birth to her triplets, Jane returned to my office looking like this: 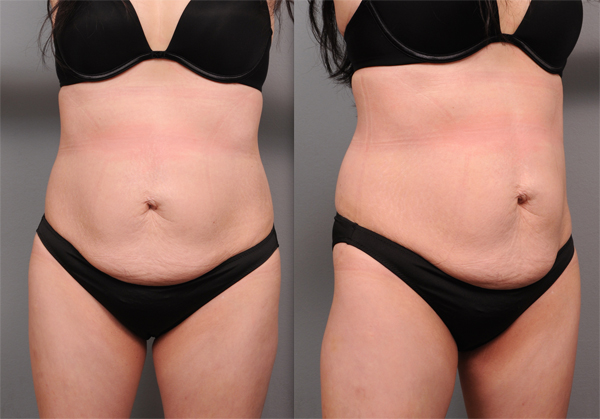 This patient, “Jane”,  had given birth to triplets about 3 years before the photo was taken. She was upset by how “stretched” her belly had become.

She said that she was now prepared to do something about the appearance of her belly. She had been living this way long enough and now that her children were out of diapers and able to do various tasks on their own, she felt that her life could fit an abdominoplasty into it. Frankly, I think that she did pretty well considering she had triplets. While she has some loose skin and laxity of the abdominal wall, she was not nearly as “stretched out” as many of my other patients who only had one baby. Occasionally, we even see a patient with a complete abdominal muscle separation called a “diastasis recti“.

Jane was back at her regular job taking the commuter train every day to New York City after dropping her children off at day care. She struggled to find 2 weeks that she could take off and still have help at home with the kids without burdening her husband too much.  In some ways, tummy tuck recovery can be more problematic than the tummy tuck operation.

Speaking of husbands, Jane’s husband wasn’t sure she needed this operation at all. He loved his wife and he wanted her to have what she was looking for, but he really didn’t think she needed to have an operation. I have seen this story play out many times before.  Husbands rarely want their wives to have surgery, but later they are typically happy their wives did after the fact.

How Is a Triplet Tummy Tuck Done?

The same way as any other tummy tucks, but with a little more effort…And so we went to the operating room. I did a little bit of liposuction in the flank area and removed all of the loose and stretched out lower abdominal skin. I also spent a fair amount of time building an “internal corset” by sewing the right and left abdominal muscles to one another in a shoe lace pattern from the chest all the way down to the pubic bone. This brought the widened and attenuated abdominal muscles closer to one another and flattened out her tummy as well. Her wounds were closed in multiple layers using dissolvable sutures and a drain was left in place. To learn more about how this all works, I made a popular video about tummy tuck surgery a few years ago and I suggest you check it out.

Nine days later I removed the drain and she was quite swollen.  I have video entitled tummy tuck recovery that I highly suggest you have a look at if you are interested in this procedure. 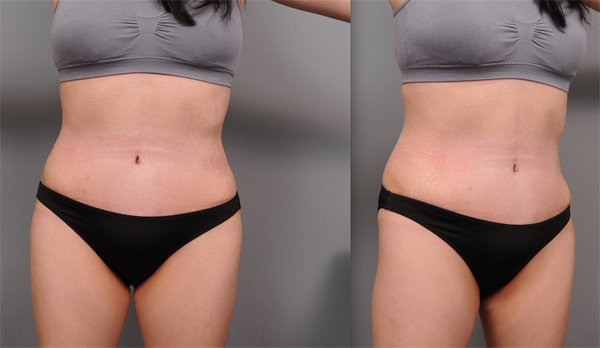 Fortunately, Jane had a good sense to perform this operation in the fall which meant that she could cover her swelling and support garments with sweaters and did not need to expose her tummy to anyone during her recovery. She had the entire winter to allow for her swelling to subside and for the scar to mature. Over the ensuing few weeks I saw her on a regular basis as her swelling decreased steadily. By 3 months time she looked like this: 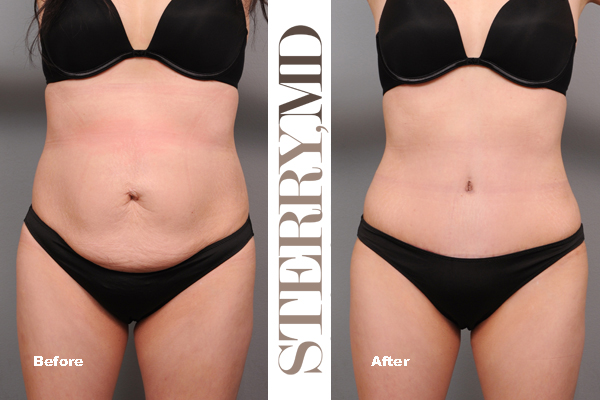 Jane’s 3-month results after her tummy tuck and liposuction of the flanks.

The following May she was able to go out to the beach in a bikini! She had a great summer with her kids down at the beach sporting her new body without anybody knowing she had a secret tummy tuck! 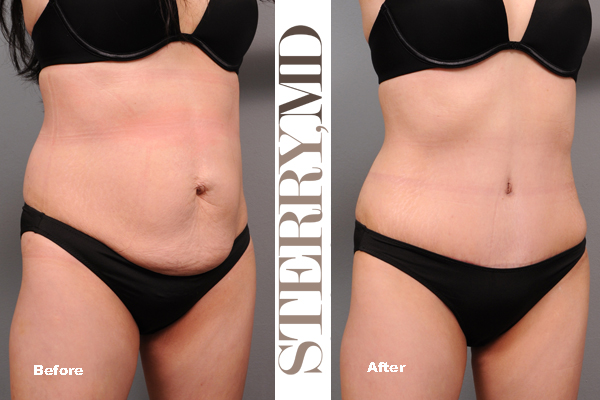 Oblique view before and after the “Triplet Tummy” was remodeled.

To see more results from tummy tuck operations have a look at our before and after gallery. If you have questions, feel free to leave them in the comments or visit our Contact page to send them online.